Some of you may relate to this. It's been a long day. You and your husband / boyfriend / fiancée come home from work, eat a quiet dinner, and then plop onto the couch in front of the television for the rest of the evening. A little romp in sheets would be nice, especially at the end of a long day, but it seems out of the question.

That was me. Ten years into marriage and I found myself in that dreaded slump. When my husband and I first married, all it took to get him excited was for me to show interest. One hint at the possibility of sex that night and he was prepared to do whatever it took to get there. That was not the case after ten years of marriage. I felt like I lost a super power.

I went searching for answers. I read at least a dozen books on relationship. I thought maybe if I was a little more adventurous, suggested new positions, or bought new lingerie, then perhaps that would do the trick. Though it worked once or twice, even those things lost their effect.

That is when I came across the Language of Desire.

What Is the Language of Desire? 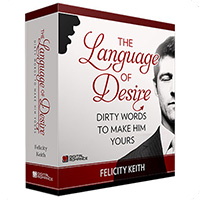 You could say the Language of Desire is a self-help program designed specifically for women who want a better sex life, whether you are married, in a relationship, or single.

What hooked me with the program was that it was not a conglomeration of tricks to get things going for one or two nights alone. The Language of Desire promised to teach me the language or a man's sexual drive. As the saying goes: "Give a man a fish, feed him for a day, but teach a man to fish, and he will be fed for a lifetime."

The hardest thing for me, while in a slump, was getting out of it CONSISTENTLY. I could figure out a scheme or trick to put off the slump for a night or two. What I could not do, it seemed, was get back into a rhythm.

The Language of Desire gave me that rhythm. Rather than giving me tricks on foreplay or getting my husband aroused, it taught me how to understand my husband's sexual drive.

What is in the Program?

The program breaks into 9 sections. The sections are as follows, with descriptions:

The first thing I did here was determine my own sexual boundaries and desires. That is important to understand going into the rest of the program. After that, I learned to harness those things and maximize them for both my benefit and his. It's called "being dirty with dignity" in the program.

There are several things offered here. The one that was best for me was understanding the anatomy of the penis. It might sound funny to some people, but I thought all I needed to do was stroke or put pressure on the darn thing and that was it. I learned that is not the case. There is a particular way to go about it and timing is everything.

There is a part of this section that discusses the use of pornography in sexual arousal, which some will find beneficial. I, however, don't use this particular part because of my personal beliefs. I don't feel as though I lost something out of this section, though.

This section is very technical, but extremely valuable. I learned there is an entire psychology behind my husband's response to sexual touching. Most people call it "being in the mood" and usually only talk about it for women. Men need to be in the mood as well and the more in the mood he is, the better it will feel. The better it feels, the more he will want it again and again.

I especially appreciated this section because it taught me to use cuddling for my benefit. I am now able to turn those cuddle sessions on the couch from sleeping sessions to extremely sexy foreplay.

I have to be honest, this section made me blush a few times while completing it. Each section comes with worksheets and this one was a little harder for me to start than the others. Once I got started, though, it went smoothly.

I said about section one that I learned my own sexual boundaries and preferences. This section helped me take those preferences / fantasies and place them into an actionable scenario. In case you haven't caught on from the title, you basically write out a sexual encounter in detail.

The great thing about this program is that it is apply as you learn. What I mean by that is you do not have to wait to finish the entire program before you can apply it. From the very first worksheet, you are able to apply it immediately.

This section escalates all of the preceding sections. Basically, you take all you have learned to this point about your own sexual fantasies, the way he responds to sexual advances, and magnify it by like a thousand.

This one was a bit different for me, because I am not single. The benefit of this section is learning how to hook a man you have had your eye on for some time, whether he is a mere acquaintance or a long-time friend. As a married woman, I initially brushed by this section without much thought. However, I returned to it and found some benefit.

Where I am already my husband's wife and his only sexual partner, it felt like I could not upgrade my relationship status. Turns out I could, though. I wanted him to continue to regard me and show his devotion to me, as his wife. I, however, wanted that exciting spark back. You know, that spark you feel in a brand new relationship. This section helped with that.

#7: Getting Your Fantasies Met

This is where the rubber meets the road (pun intended). I want to fulfill my husband sexually, but I want to be fulfilled as well. I think we, as women, often feel guilty over focusing on ourselves for a change. This section is all about you, what your sexual desires are, and utilizing what you have learned to get him to fulfill those fantasies.

This might sound strange, but since my husband and I married, we have spent maybe a total of ten days away from each other. So, I have not explored this section really. However, if your man travels a lot, then this section teaches you how to have sexual experiences with each other from a distance.

Dirty talk is discussed in several sections, but here you really drill down on it. Honestly, this section is what gets my husband off the couch and into bed more often than anything else. You learn how to use words to get him in the mood, almost like flipping a switch.

I am sure there are other great programs out there, but I personally found this one extremely beneficial. It has been a year since the dreaded slump and my husband and I are extremely happy with where we are.

If my story sounds at all familiar, or if you are in a slump and hoping to kick it to the curb indefinitely, you may consider checking out the Language of Desire program. I promise, you will not be disappointed.