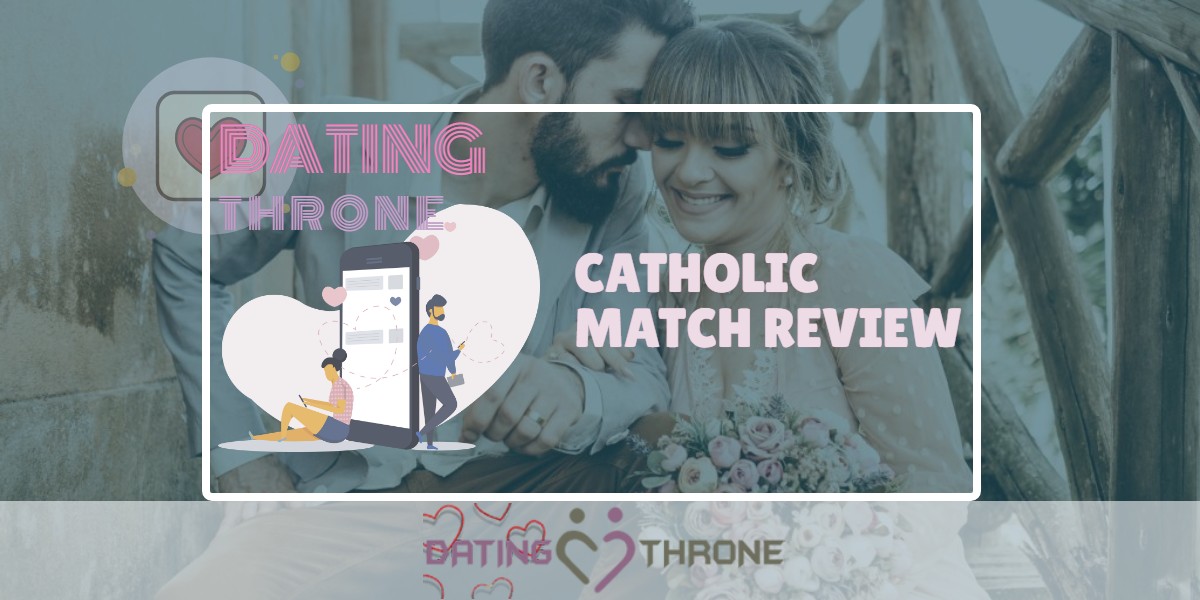 The Issue of Loneliness

There was a time in my life when I felt incredibly lonely. I wanted to meet someone desperately, but nothing I did worked.

Have you ever tried social media sites? Did you feel like all you were doing was wasting your time? I am asking because that is exactly how I felt.

I always believed there had to be a way to meet someone other than going to bars or nightclubs. That may work for the select few, but it was definitely not for me.

A friend of mine told me about a dating site called Catholic Match. Of course, I said no. I figured it was no different than anything else I had tried and I started to lose faith.

Losing faith devastated me because I am after all a devout Catholic. One night I was so lonely it started to hurt. Against my better judgment, I gave the site a try.

That may have been the best decision I ever made. Three weeks later I met the man of my dreams. No, he was not perfect.

He was however perfect for me. We were married one year later. Two years have now passed and we are expecting our first child.

Catholic Match is a dating service enabling you to use your relationship with God and your values to find your match as opposed to some crazy scientific formula.

When I researched the site I discovered there are more than 27 million Catholics in the United States. The site gave me the opportunity to meet someone who shared my faith that I could fall in love with so we could build a life together.

The profiles I read centered on family and faith. This is how I figured out who would compliment my specific interests and qualities. The site was created for Catholics interested in marriage.

I looked into a few of the other sites for Catholics and I was disappointed. There were a lot fewer members and I found the profiles I was able to see lacking. I learned Catholic Match has around five times the number of members than the majority of sites.

The site was founded by Mike Lloyd, Brain Barcaro and Jason LaFosse in 2004. There are now more than 1.5 million members. I heard a dating app was released just this year for both Android and iOS. 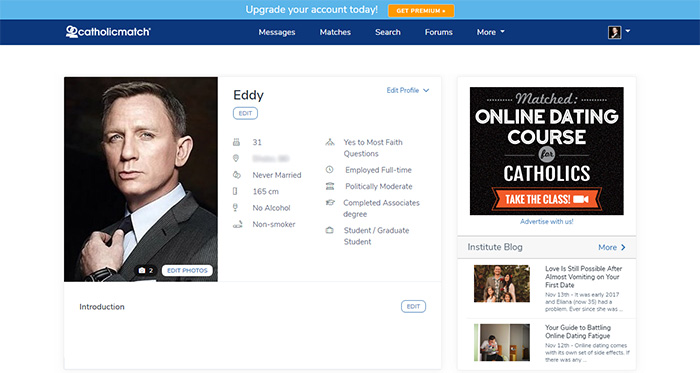 It took me about thirty minutes just to create my profile. There were a lot of questions about my faith, interests, lifestyle and background. I was glad because all of this is important to me.

My views on Catholocism and my faith were critical for finding the right match. I answered questions about how often I go to mass and what I have learned from my church.

I was also asked about my views on premarital sex, papal infallibility, holy orders, the sanctity of life and immaculate conception. My future husband answered all of the questions in almost exactly the same way I did. 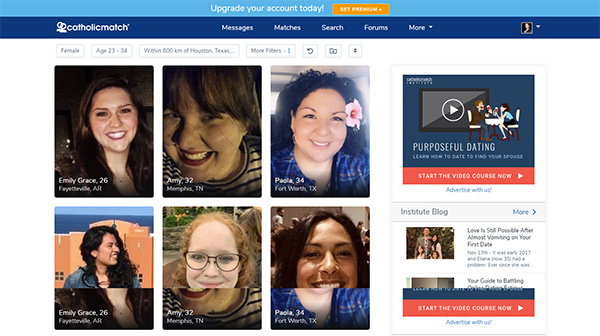 As soon as I had completed my profile, I was directed to the home dashboard for members. I was able to search for members closest to my location. This was when I really started to believe I just might find someone.

I am a little shy, so I liked some of the profiles instead of sending any messages. Before long, I saw a lot of men had liked my profile. I should mention I chose the $12 subscription term. I was shocked when I started receiving messages.

I was not sent any matches until I completed the Match Portrait questionnaire. I had no difficulties with the multiple-choice questions. They were about my views, traits, outlook, values and attributes the site knew were important for a good relationship.

I did not have enough time to finish the questions, but the site let me finish everything later. The site sent matches they believed had the best odds of creating a healthy relationship. This was how I met my husband.

Anyway, I received matches one at a time. I was able to say if I was interested. I was also notified of anyone interested in me. I was amazed by how many tools the site offered.

There is the Temperament Test to determine compatibility. This is an automated process of determining my bets matches based on my approach to faith and personality. Everything focused on my faith.

I did a lot of reading on the blog about romance, relationships and sexuality. There were opinions, advice and polls. I really liked Emotigrams. I could start talking to other members just by sending a wink or a smile. I never had the nerve to send a kiss.

I answered the multiple-choice questions for the Personal Interview too as opposed to using the pre-existing ones. I sent them to a few of the users to see the way they would answer specific questions.

I knew I would never be able to ask them during a general conversation. I liked the fact everyone used their first name instead of some made-up user name. I knew my name would be kept confidential.

I found out I could block any user, but I never needed to. I was also able to control who could see my private pictures. I read the Terms of Service and Private Policy of the site and I was satisfied.

I want to mention the creators are the owners of the site. This means the site is more about helping people like you and me than making money.

Every day, there were new topics being posted. I took one of the online courses to learn more about relationships. Even though I was raised Catholic, I still had some questions I was always wary of asking. I finally got my answers from Catholic Match.

There are a lot of benefits to Catholic match.

I was very pleased with the guarantee. Catholic Match promises to provide you with another six months for free if you do not find your ideal match during your six-month subscription.

I found the rules for the guarantee reasonable. This includes:

If you have not made your match at the end of six months, all you have to do is click on the redeem button within seven days before your subscription expires.

I believe in Cat​​holic Match. The site asks just the right questions to ensure all of your matches have very similar beliefs. There are so many tools available to help you find the person you are looking for.

Since everything is based on a combination of your personality and faith, your chances of finding the person you are looking for are good. There are 1.5 million Catholics on this site.

If I had not waited so long, I would have met my husband sooner. Please do not make the same mistake I did. Take a look at Catholic Match now if you are serious about finding a meaningful and lasting relationship within the Catholic faith.